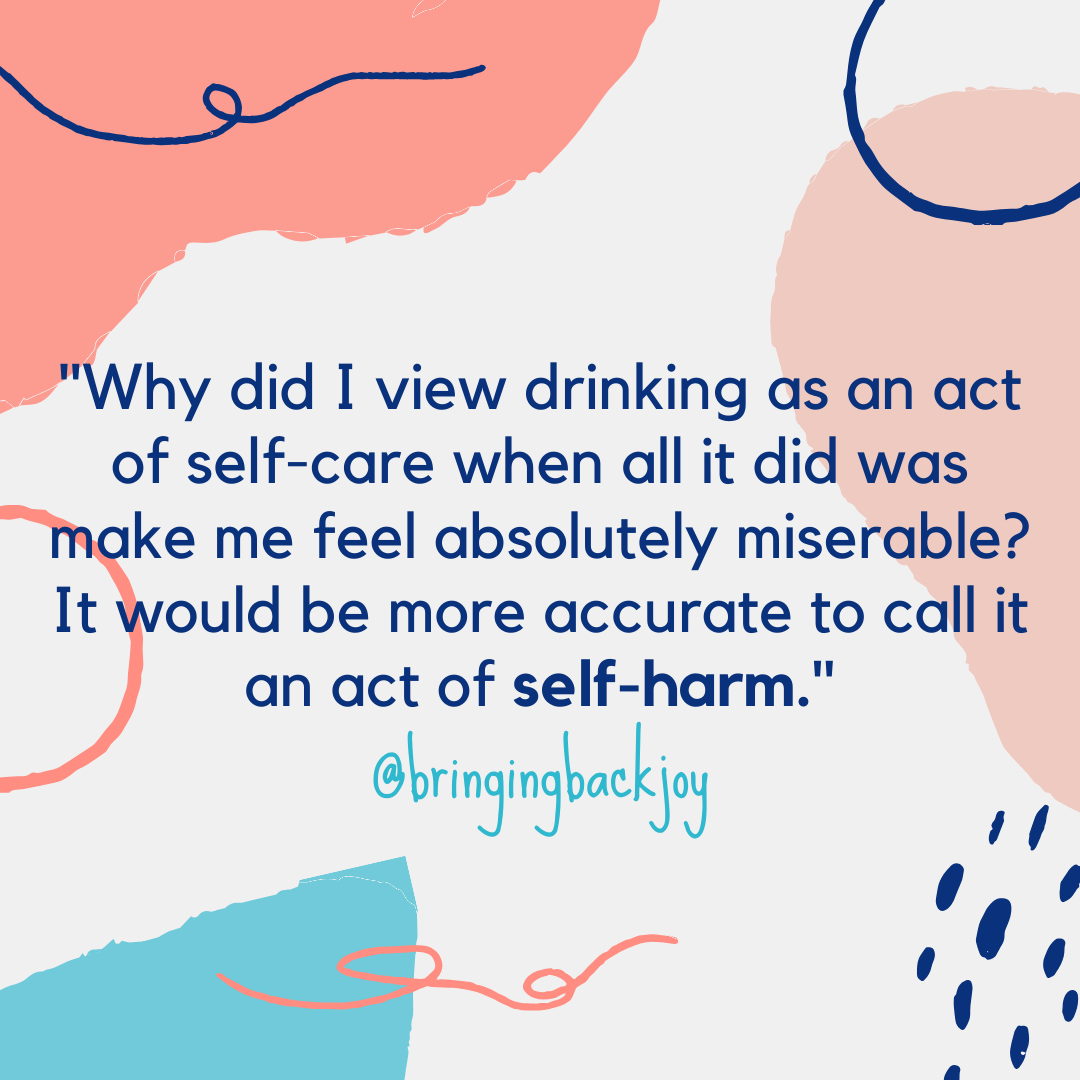 During my drinking days, my definition of self-care was letting loose and getting wasted because I “deserved” it.

If I got up and dragged myself to work, forced myself to go to the gym a couple days a week, ate decently healthy, and somehow made it to Friday, I thought that meant I had a free pass to get blacked out over the weekend and “live my best life”…I had such a skewed idea of what living my best life really meant.

My hangovers were always at least 3 days long. My dopamine and serotonin levels were in the negatives for a few days after a full weekend of binging. Mondays were unbearable. The weekend before the 4th of July this year, I called out of work both on Monday AND Tuesday because I was so depressed and hungover from the weekend…and then I continued to drink heavily on the 4th of July like nothing happened.

Why did I view drinking as an act of self-care when all it did was make me feel absolutely miserable? It would be more accurate to call it an act of self-harm.

Now, I’ve realized that giving myself the gift of sobriety is the ultimate act of self-care. I feel stronger, healthier, and happier in every way. Life is not necessarily easier, but it’s still so much better. And I’m getting more and more confident in situations where alcohol is involved and I’m the only one not drinking.

I went to a food and wine festival this past Friday and I guilt-free treated myself to all the delicious gourmet food I wanted because I wasn’t drowning myself in unlimited red wine. I treated myself to a spin class the next morning while my boyfriend was in bed with a terrible hangover. I spent the weekend actually relaxing and recouping, and the only thing I binged on was Keeping Up with the Kardashians and dark chocolate. I would so much rather indulge in my favorite shows, treats, and fuzzy blankets than convince myself that I “deserve” a weekend full of poisoning my body and feeling awful for days on end.

My weekends are now dedicated to REAL self-care. I spend my money on facials, self-help books, hot yoga classes, and Pad Thai take-out rather than piña coladas and Irish car bombs. I wake up early on Saturday and Sunday and go to the gym just because that used to be unfathomable for me not too long ago and it makes me feel really proud of myself.

Alcohol was always a short-lived rush with long-term consequences disguised as a positive reward. I’m 63 days sober today and can confidently say that I don’t miss binge drinking weekends, hangovers, or my old version of “self-care” at all!